Madonna and Child between Saints Afra and Ulrich with four Shields underneath c. 1493

With the text verso.

A very rare attractive woodcut with extensive contemporary hand-colouring, the red colour heightened with gum arabic. It was created for the Breviarum Augustanum, printed by Erhard Ratdolt in 1493 and commissioned by Frederic II, count of Hohenzollern, bishop of Augsburg. His coat-of-arms is shown at center lower right, joined by the arms of Augsburg at left and crowned by a bishop’s mitre. At far left and far right, the coat-of-arms signify the House of Dillingen. The woodcut was reused by Ratdolt in 1495 for his Antiphonarium Augustense for Frederic II of Hohenzollern. He later reused this woodblock again in about 1505 with the coat-of-arms of Heinrich IV of Lichtenau (see the impression Albert Blum, sale Sotheby’s London, March 30, 2011, lot 26).

A comparison of the facial features of the standing Virgin in this woodcut with the face  Hans Burgkmair’s earliest known oeuvre of 1491, a small Virgin and Child, reveals a striking stylistic similarity (see image below). The faces of the two works are similarly drawn and modeled. The shape and forming of the eyes, the eyebrows and the nose are clearly related. Knowing that Hans Burgkmair worked for Erhard Ratdolt in Augsburg at that moment, the attribution to Burgkmair can be justifiably assumed. 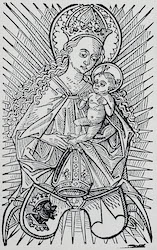 Hans Burgkmair was apprenticed from 1488 to 1490 to Martin Schongauer in Colmar. As of 1491 he started his career as an artist with Erhard Ratdolt in Augsburg, who introduced the young Burgkmair to the art of colour printing from several woodblocks. This concept influenced Hans Burgkmair throughout his career, culminating in his masterpiece: Lovers surprised by Death (B.40).

Our woodcut is known in a handful of impressions only, all of them coloured. The online images of the two copies at the Staatsbibliothek, Munich (1493 and 1495) show a similar colour palette. The style of colouring of the blue coat of Saint Ulrich also indicates the same hand. The colouring of a workshop can likely be assumed, probably out of the publishing house of Erhard Ratdolt.

Schreiber cites five impressions of this subject, which might also include the later issue of 1505. To these few known single leaves, of which two are in institutions (Minneapolis - see illustration below, and Berlin) a handful of impressions in books must be added. 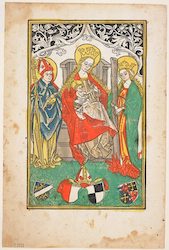 previous
page 8 of 20
back to overview
next
We use cookies to enhance your experience on this website. Find more info here.